March 28, 2016, St. Paul — IFP Minnesota, a St. Paul-based media arts center, has announced the winner of the IFP MN Screenwriting Residency, a new competition for Minnesota screenwriters. Andy Froemke, of Lindstrom, MN, has won the $10,000 residency out of a field of 99 applicants. His screenplay, THE LOWRIE GANG, tells the incredible true story of Henry Berry Lowrie, a “Native American cross between Jesse James and Robin Hood,” who captures national headlines by rallying a mixed race band of outlaws to stand up to the Ku Klux Klan in post-Civil War North Carolina after they gun down his father and brothers. The St. Paul-based residency is funded by the Knight Foundation’s Knight Arts Challenge with matching funds by IFP MN, as an annual competition through at least 2018.

THE LOWRIE GANG was selected by a national panel consisting of key influencers in the movie-making industry: Academy Award nominee Mason Novick, producer of JUNO and 500 DAYS OF SUMMER; Ilyse McKimmie, Labs Director of the Feature Film Program at the Sundance Institute; and Kate Hagen, a writer and Community Director at the influential Black List.

In addition to the $10,000 prize, Froemke will also receive support in fostering connections with industry advisors and production companies, free classes at IFP MN, and a staged reading of his screenplay (date TBD).

The residency is the only one of its kind to specifically celebrate Minnesota screenwriters, and was a blind competition (all submitted screenplays had no identifying elements, author’s name, bio, awards, etc.). Two sets of panels—one local, and one national—participated in a process that selected 10 finalists, ultimately choosing THE LOWRIE GANG as the winner. All 10 finalists will receive guided mentorships and dedicated classes to refine and improve their work.

“This is a great opportunity for the top 10 screenplays to be evaluated by our outstanding national panel, said IFP MN’s Executive Director, Andrew Peterson. “They were uniformly impressed with the work, and carefully weighed each project before ultimately selecting THE LOWRIE GANG as the winner.” 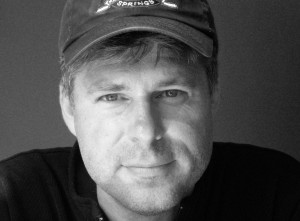 Andy Froemke hails from the Deep South but began his storytelling career following Robert Redford around the rivers of Montana, co-producing/co-directing “Shadowcasting: The Making of A River Runs Through It.” The documentary aired on PBS and French cable, garnered a Regional Emmy nomination, and won a Gold Hugo at the Chicago Film Festival. Mr. Froemke made his feature film directorial debut with the psychological thriller PARASITE in 1995. Shot in 13 days in the Arizona desert for $40,000, the film would eventually sell to both Asian and North American video markets.

Moving to Minnesota, he turned his focus from production to screenwriting. In 2014, he provided scripted material for the ABC series “In an Instant,” optioned a psychological thriller to Movierockets Entertainment, and won an unprecedented 5 gold medals (for script of the month) on Talentville.com.

A member of IFP MN and the Minneapolis/St. Paul Film Society, he enjoys supporting local filmmakers and fellow writers. When he’s not sitting in a theater, you’ll find him in a library archive indulging in his passion for history and finding forgotten stories.

BEADED ROAD by Wenonah Wilms
A haunted tribal elder and her pregnant granddaughter take a road trip back to a closed Indian boarding school to find answers lost in the past.

THE BLACK KING by Billie Jean Van Knight
The true story of Bass Reeves, the first black U.S. deputy marshal and his desperation to be the best despite hostile conditions and a conspiracy to end his life.

BUDDY PRICE by Eric LaValle
The biggest country music star of the 1980’s battles aging, addiction, and headset microphones in the 1990’s.

DOLLHOUSE OF DEATH by Susan Marks
In 1925 mafia-run Chicago, socialite Frances Glessner Lee launches her own criminal investigation into the mysterious murder of an entire family, with the help of her dollhouse crime scene and an unlikely team of investigators.

THE HUNT by Tim Dahlseid
A psychological thriller about an ex-con who finds a camera with horrific pictures of kidnapped girls. He sets out to find the kidnapper and clear his name before a vindictive detective can pin it on him.

THE LOWRIE GANG by Andy Froemke (winner)
The incredible true story of Henry Berry Lowrie, a Native American cross between Jesse James and Robin Hood, who captures national headlines by rallying a mixed race band of outlaws to stand up to the Klan in post-Civil War North Carolina after they gun down his father and brothers.

THE MORPHING OF EDDIE LUBECK by Alvin Easter
A B-movie actress from the 1960s is drifting into senile dementia but one of her devoted fans learns he can make money to support her, and himself, by dressing up and passing himself off as her at fan conventions and on interview shows.

SPLIT ROCK LIGHT by Andy Froemke
When a small town police detective mourning the death of his wife fishes a woman with amnesia out of Lake Superior, he discovers they’re linked to a tragic turn-of-the-century romance replaying itself in the present day

Kate Hagen is a writer living in Los Angeles. She is the Director of Community at The Black List, the industry’s leading champion of unproduced screenplays. The Black List screenplays have gone on to earn over $19 billion at the worldwide box office and have been nominated for 171 Academy Awards (winning 35). At The Black List she created the 500 Feminist Films and 31 Days of Feminist Horror Films features for The Black List blog. Exploring film through a feminist lens is Kate’s main focus as both a creator and a cultural observer. Before working with The Black List, Kate was a reader for a variety of production companies and screenwriting competitions. She’s a graduate of Columbia College Chicago’s Film & Video department, and writes character-driven genre scripts with her partner, Jack McDonald. Kate has also published work with xoJane and Go Into the Story.

For the past 17 years, Ilyse McKimmie has served as a key staff member of Sundance Institute’s Feature Film Program. As Labs Director, she leads the selection process for U.S.-based filmmakers for the Screenwriters and Directors Labs, performs ongoing outreach to new filmmakers, provides continuous support to program alumni, leads the program’s diversity initiatives, and plays a significant ongoing role in the Creative Producing Fellowship and the Episodic Story Lab. Films developed at the Labs during her tenure include The Diary of a Teenage Girl, Fruitvale Station, Beasts of the Southern Wild, Martha Marcy May Marlene, Pariah, Sin Nombre, Half Nelson, Red Road, and Maria Full of Grace, among many others.

Mason Novick is an independent producer based in Los Angeles. His feature film credits include RED EYE, JUNO, (500) DAYS OF SUMMER, JENNIFER’S BODY, YOUNG ADULT, BAD WORDS, and RICKI AND THE FLASH. Mason was nominated for an Academy Award for Best Picture for JUNO, and won an Independent Spirit Award for Best Feature. That same year Mason was nominated for the Darryl F. Zanuck Producer of the Year Award in Theatrical Motion Pictures by the Producers Guild of America. (500) DAYS OF SUMMER was nominated for Best Motion Picture (Musical or Comedy) at the 2010 Golden Globes. It was also nominated for three Independent Spirit Awards, including Best Feature, and won for Best Screenplay. Mason was also a producer on YOUNG ADULT, directed by Jason Reitman and RICKI AND THE FLASH, directed by Jonathan Demme. Mason currently manages several writers including Oscar winner Diablo Cody, and screenwriter and author Chad Kultgen.

“I was greatly impressed by the dedication of our local panel, who thoughtfully evaluated the 99 projects to narrow it down to the 10 finalists,” said program director Eric Mueller. “They had a very difficult time choosing the final 10 from such a strong field of applicants. Their diversity of viewpoints yielded a lively discussion to arrive at the finalists.”

David Grant is a Twin Cities-based screenwriter playwright, who has created work for Russell Simmons’ Def Pictures, HBO, Davis Entertainment and the Showtime Network, among others. David has been a recipient of screenwriting fellowships from the Minnesota State Arts Board and the McKnight Foundation. He and KTCA, Twin Cities Public Television, were awarded the 1990 Regional Emmy, Best Original Dramatic Program, for THE SCREENPLAY PROJECT: FOUR SHORTS. David teaches screenwriting at IFP MN and has also taught at The Loft Literary Center and the Playwrights’ Center. He is president emeritus of Screenwriters’ Workshop, a core alumnus member of The Playwrights’ Center, and a member of the Writers’ Guild of America, West.

Rini Yun Keagy is a filmmaker and visual artist. Her work is multi-modal and research-based, and investigates race and labor, disease, and sites of historical and psychological trauma. Her short films have screened nationally and abroad. Rini is a 2016-17 Minnesota State Arts Board Artist Initiative grant recipient for her current work-in-progress feature Ordinal (SW/NE), for which she also received a 2015 Carleton Arts and Technology initiative grant. Rini has worked in Indonesia, Thailand and Cuba, and has taught film studies and production courses at University of the Arts, University of California Santa Cruz and Carleton College.

Cristina Pippa is an award-winning writer and the recipient of a 2015 Artist Initiative grant from the Minnesota State Arts Board. Cristina is a teaching artist at the Loft Literary Center, Community Faculty in the Screenwriting BA program at Metropolitan State University, and a college professor in Minnesota prisons. A published and commissioned playwright, she completed her BA at Columbia University and her MFA at the University of Iowa Playwrights Workshop, where she received the Norman Felton Fellowship and the Iowa Fellowship for the Arts.

Minneapolis native Kenneth Rance graduated cum laude with a B.A. in Radio/Television/Film Production from the Howard University School of Communications in 1992. The following year, Kennth moved to Los Angeles, California where he landed a position as an office production assistant on “ROC”, the critically acclaimed FOX series. After “ROC”, Kenneth worked as an assistant at the William Morris Agency. Soon after, Kenneth was admitted to the CBS Television Executive Management Training Program where he developed the movie-of-the-week. CYBERSTALK, for Norton Wright Productions/CBS Productions and coordinated the first annual, CBS/WGAw Television Writers Workshop for emerging minority writers. In 1996, Kenneth sold his first motion picture screenplay SCARY DATES to 20th Century Fox and was later inducted into the Writers Guild of America where he has served as Co-Chair for the Committee of Black Writers and Member-At-Large on the Committee Advisory Panel. Since then Kenneth has written and produced many film and television projects for several major studios and independent production companies (Davis Entertainment, Fox 2000, Destination Films, Universal Pictures, etc). Kenneth most recent film NEW IN TOWN (Gold Circle Films/Lionsgate) starring Renee Zellweger and Harry Connick, Jr. was released January 2009.

About IFP Minnesota
IFP Minnesota’s mission is to advance a vibrant and diverse community of independent film and media artists through networking, education, funding, and opportunities for showcasing their work. IFP MN envisions a world where expression through images is encouraged and valued. It is the goal of IFP MN to lead the way in supporting the independent filmmaker by creating a healthy and viable filmmaking community in Minnesota. ifpmn.org