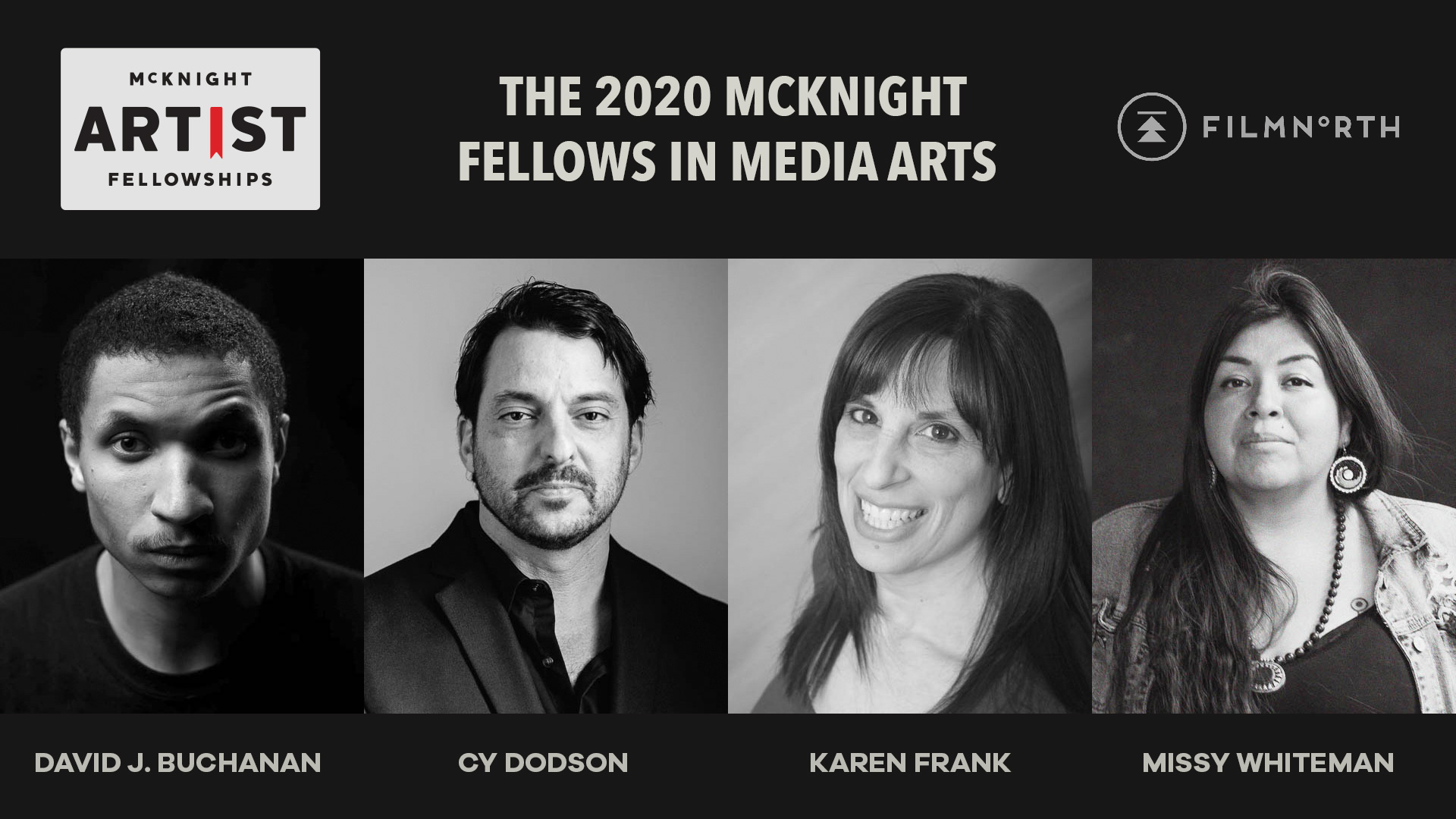 FilmNorth is pleased to announce the four Minnesota artists selected to receive the 2020 McKnight Fellowships for Media Artists. This year’s fellows are David J. Buchanan of Minneapolis, Cy Dodson of Minneapolis, Karen Frank of Columbia Heights, and Missy Whiteman of Pierz, MN.

Out of a field of 43 applicants, the four fellows were chosen by a national panel of media artists and curators: Bryce Norbitz, Director of Scripted Programming at Tribeca Film Institute in New York; Robert Patla, executive for WarnerMedia’s Talent Development and Programming department in Los Angeles; PJ Raval, a queer, first generation Filipino American filmmaker in Austin, TX; and Diana Williams, Executive Vice President of Content at MWM Universe in Los Angeles.

“As we see and hear on our televisions, phones and devices, media artists have stepped in to be key witnesses and interpreters of the unfolding events related to last week’s murder of George Floyd, and the ongoing demands for justice and accountability,” said FilmNorth Executive Director Andrew Peterson. “In times like these, we’re reminded, perhaps more than ever, of the importance of media artists and professionals, who strive to document the human experience, bring light to the darkness, and hold up a mirror to society. Through their incredible work, each of this year’s Fellows does this and more. They are witnesses to history and advocates for truth—-helping us to understand our world and communities, and make them better.”

In addition to the cash award, the program supports its fellows by creating opportunities to meet with local and national art professionals, by organizing a year-end McKnight Retrospective featuring the fellows, by providing assistance to attend the annual Film Independent Forum in Los Angeles, and by offering special class and workshop opportunities through FilmNorth.

David J. Buchanan is a Minneapolis-based writer/director whose work includes RIDESHARE, SEE YOU SOON, and the newly acclaimed feature film, BLACK IN MINNEAPOLIS. David started his career in documentary filmmaking at fourteen years old, and his work includes many localized stories around social justice. At fifteen, he won the Screenlabs Challenge Audience Award at Screenwriters’ Workshop, where he developed his screenplays. At twenty, he worked on his first commercial project, where he learned about the craft of lighting. He has written over 15+ feature films, 35+ shorts, worked on 300+ docs, 100+ commercials, and 20+ feature films.

Cy Dodson is an Emmy-nominated director and editor located in Minneapolis. MY LAST BREATH (2015) and THE RAGMAN (2017) were Dodson’s first two films about individuals who demonstrated a desire to live creatively in spite of hardship and isolation. His third film, BENEATH THE INK (2018) hits on complex racial issues in his Ohio hometown in a way that highlights human stories of forgiveness and redemption. Beneath the Ink was nominated for a national Emmy in 2019, won Jury Awards at DocEdge (Academy qualifying), BendFilm and Fargo Film Festival, and won Audience awards at Palm Springs Shortfest, DC Shorts, and Dances With Films in Los Angeles. Conde Nast acquired Beneath the Ink for their ” GQ Stories” platform, and it was selected as a Vimeo Staff Pick 2020. Cy owns and operates Triumph Pictures, specializing in documentary-style branding content for corporate and non-profit entities.

After starting out as a playwright, Karen Frank attended Hafed Bouassida’s screenwriting program at Minneapolis Community and Technical College. Her feature screenplays have reached the finals of the WeScreenplay Feature competition, semifinals of The Austin Screenplay Competition, The BlueCat Screenplay Competition, Diverse Voices, and the quarterfinals of Page International Screenwriting Awards. Additionally she was the winner in the short screenplay category of the 2017 Shore International Screenplay Competition, the 2009 McKnight Fellowship, and attended the 2019 Stowe Story Labs. Her short screenplay, YOU ARE HERE, filmed in Minneapolis last December, is now in post-production (directed by Jason P. Schumacher, produced by Kelly Lamphear-Dash of Juggling Act Productions and GreyDuck Productions). She is a member of the Minnesota Screenwriters’ Workshop.

Missy Whiteman (Northern Arapaho and Kickapoo), is an Emmy-nominated writer, director, producer, and multimedia artist. Whiteman understands her work to be a voice for her ancestors and their untold stories of ancient knowledge. While based in part Indigenous traditional practices and perspectives, her work also addresses themes of historical genocide, loss of culture, language, and land in relation to colonization. Whiteman questions the connection of life, death spirit world, and the rebirth process of revitalizing DNA memory, spirit healing, and redefinition of cultural identity. Whiteman is an alumni of The Sundance Native Lab Fellowship and Jerome Fellowship for her short film project THE COYOTE WAY: GOING BACK HOME, Which has Transformed into THE COYOTE WAY X: EXPANDED CINEMA. This new multidimensional cinematic experience of THE COYOTE WAY: GOING BACK HOME short film which is intertwined with performance, live score, 350/VR and audience participation.

There were four professionals who served as panelists, selecting four fellows from 43 total applications. Juror Williams reviewed the 13 screenwriting applications, and jurors Norbitz, Raval, and Patla reviewed the 30 applications from non-screenwriters.

Bryce Norbitz is the Director of Scripted Programs at Tribeca Film Institute where she empowers filmmakers through grant programs, workshops, screenings and events. Bryce curates projects throughout TFI funding programs, including Tribeca All Access, IWC Filmmaker Fund, AT&T Presents: Untold Stories, TFI Sloan Filmmaker Fund, Through Her Lens, etc. She travels throughout the U.S. and abroad to work with new voices to provide connections and support through markets and film pitch training. Bryce is a founder Brooklyn-based production company UglyRhino. She has worked at Chicago Shakespeare, The Second City, The Public Theater, and Nederlander Worldwide Entertainment. Bryce is a New York area native is a graduate of Northwestern University.

Robert Patla is an Executive for WarnerMedia’s Talent Development and Programming department. He helps keep a constant influx of the best and brightest writers and directors coming through the doors of HBO, Turner, TBS, TNT, Adult Swim, and HBO MAX, while promoting diversity and inclusion in front of and behind the camera. He helps run the emerging writer and director program HBO ACCESS, manages the Visiting Director program, and is consistently working to make sure WarnerMedia stays as close to or above the 50% when it comes to episodes written and directed by women, people of color, and the LBGTQ communities.

PJ Raval is a queer, first generation Filipino American filmmaker whose work explores the overlooked subcultures and identities within the already marginalized LGBTQ+ community.  Named one of Out Magazine’s “Out 100”, PJ’s feature credits include TRINIDAD: TRANSGENDER FRONTIER (Showtime), BEFORE YOU KNOW IT (America ReFramed, National Gay and Lesbian Journalist Association Excellence in Documentary Award 2016), and CALL HER GANDA (GLAAD Media Award nominee) which recently broadcast on POV (PBS) to millions of viewers. Also an accomplished cinematographer, PJ shot the Academy Award‐nominated Best Documentary TROUBLE THE WATER and is a 2015 Guggenheim Fellow, 2016 Firelight Media Fellow, 2017 Robert Giard Fellow, and a member of the Academy of Motion Pictures Arts and Sciences and the Producers Guild of America.

Diana Williams’ career has revolved around storytelling – reinventing the way stories are told in new mediums, reigniting experiences on traditional platforms, and pushing the limits of technological innovation. She is currently the Executive Vice President of Creative at MWM Universe (MWMu), focusing on cross-platform content creation while also acquiring and extending IPs across all media including film, TV, audio, and publishing. Prior to MWMu, Diana was a producer in the Lucasfilm Story Group, an incubator for shared continuity across the Star Wars universe, and part of the team that launched ILMxLAB. Diana is the co-founder and editor of The Gatecrashers (graphic novel) and began her career as an independent film producer.

ABOUT THE MCKNIGHT ARTIST FELLOWSHIPS

Founded on the belief that Minnesota thrives when its artists thrive, The McKnight Foundation’s arts program is one of the oldest and largest of its kind in the country. Support for individual working Minnesota artists has been a cornerstone of the program since it began in 1981. The McKnight Artist Fellowships Program provides annual, unrestricted cash awards to outstanding mid-career Minnesota artists in 11 different creative disciplines. Program partner organizations administer the fellowships and structure them to respond to the unique challenges of different disciplines. Currently the foundation contributes about $1.7 million per year to its statewide fellowships. For more information, visit mcknight.org/artistfellowships.

ABOUT THE MCKNIGHT FOUNDATION

The McKnight Foundation, a family foundation based in Minnesota, advances a more just, creative, and abundant future where people and planet thrive. Program interests include regional economic and community development, Minnesota’s arts and artists, education equity, youth engagement, Midwest climate and energy, Mississippi River water quality, neuroscience research, international crop research, and rural livelihoods. Founded in 1953 and independently endowed by William and Maude McKnight, the Foundation has assets of approximately $2.2 billion and grants about $90 million a year. Learn more at mcknight.org, and follow us on Facebook and Twitter.

FilmNorth’s mission is to empower artists to tell their stories, launch and sustain successful careers, and advance The North as a leader in the national network of independent filmmakers. We achieve our mission by nurturing a vibrant, diverse community of film and media artists; providing education and resources at every stage of their careers; and celebrating their achievements.