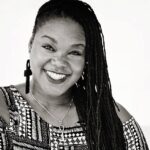 FilmNorth’s Board of Directors has elected Saint Paul Neighborhood Network’s Bianca Rhodes as the organization’s new Board President at their December board meeting. Rhodes will serve a one-year term at the helm of the region’s largest filmmaker service organization.

“Bianca has been an extremely dedicated and thoughtful member of the Board for many years,” said FilmNorth Executive Director Andrew Peterson. “Her work at SPNN and within the community makes her uniquely qualified to lead the Board as FilmNorth continues its work at the forefront of media arts education and support in the US.”

Rhodes steps into the position most recently held by Bethany Whitehead, who is stepping off of the board at the end of her term.

In addition, Alison Guessou, Rebecca McDonald, Sherry Meek, Jamie Schumacher, and Quinn Villagomez AKA Shimmer were unanimously voted onto the Board of Directors for two year terms, starting January 2022.

“This dynamic group of leaders offers a wealth of knowledge, experience and demonstrated leadership in the region,” Peterson said. “We look forward to the contributions each of them will make in helping to guide FilmNorth as work together to advance FilmNorth’s strategic goals and implement our new Theory of Change.”

Alison Guessou is a Cameroonian-American narrative filmmaker and producer based in Minneapolis. She wrote, produced, and directed “911,” which was her first production released in 2017, followed by “What Marilyn Didn’t Know,” released in 2018. She directed the comedy “Happily Married After,” and is a recipient of the Jerome Foundation 2019 Minnesota Film, Video and Digital Production Grant. Guessou currently serves on the Board for Minnesota Women in Film and Television. She received her bachelor’s degree from the College of Saint Benedict, and master’s degree in Project Management from St. Mary’s University.

Rebecca McDonald is a director, photographer, and entrepreneur with over 15 years of leadership across legacy and community media, journalism, and strategic communication. As the CEO and founder of BFRESH Productions, a media and communications firm, she is dedicated to bringing communities together through storytelling to reflect a more accessible, inclusive and collaborative people-first future. Rebecca is a descendent of the White Earth Anishinaabe and believes sharing personal histories and narratives can be a powerful catalyst for social change. She is currently the director of SPEAK MPLS, a community media center and new steward of the public access TV channels in Minneapolis where members access media labs, equipment, and production space to create content and the platforms to speak their truth.

Sherry Meek is the Managing Director of Programming for Twin Cities PBS (tpt). She and her team create and execute four local broadcast services. She also curates tpt’s local history series, Minnesota Experience, and has served on national selection committees for documentaries on PBS’s POV and the Independent Television Service. Sherry is a past board member with the Public Television Programmer’s Association and the St. Paul Neighborhood Network. She lives in St. Paul with her husband and two daughters.

Jamie Schumacher traded the warm beaches of Southern California for the snowy lakeshores of Minnesota. Her goal was to find an affordable place to live where arts, culture, and community could coexist. She found all that and more, but it took a few months for what she found to thaw out completely.

While working as the executive director of the West Bank Business Association, Jamie helped secure Cedar Riverside’s role among Minneapolis’s city-designated cultural districts. She now works with LISC Twin Cities, helping build the capacity of the more than two dozen cultural and creative districts of Minneapolis and St. Paul. Also a visual artist and an accomplished writer, her written work has been featured by Pollen, the Star Tribune, and the Minnesota Women’s Press. Her book It’s Never Going to Work was released in 2018 and details the ups and downs of starting an arts nonprofit in the Northeast Arts District. Butterflies and Tall Bikes, released in 2021, is a compelling narrative nonfiction focusing on the West Bank neighborhood.

Jamie’s experience in a multi-racial immigrant family influences her life and creative endeavors. Her father and mother emigrated from Sri Lanka and Poland respectively, and her experience in a mixed family, as well as her work in an immigrant community, inspires and informs her. Also a visual artist and muralist, her artwork and writing also reflect this passion for community and culture.

Quinn Villagomez AKA Shimmer is a broadcast journalist, LGBTQ media personality, host and MC. Quinn co-hosts RARE Productions on KFAI Radio’s Fresh Fruit, the longest running LGBTQ radio program in the nation. She is a proud Transgender Latina woman who loves entertainment and media, and has hosted several events in the Twin Cities. Quinn is also a social justice activist for transgender and LGBTQ rights. She is the creator and founder of two highly successful Fashion Shows here in the Twin Cities: The Purple Ones – A Prince Inspired Fashion Show; and designICON – An Icon inspired Fashion Show. Quinn is currently starring in the T-Time Network’s T-Time With the Gurlz: Twin Cities – an LGBTQ Media platform that centers on trans women of color/femmes.