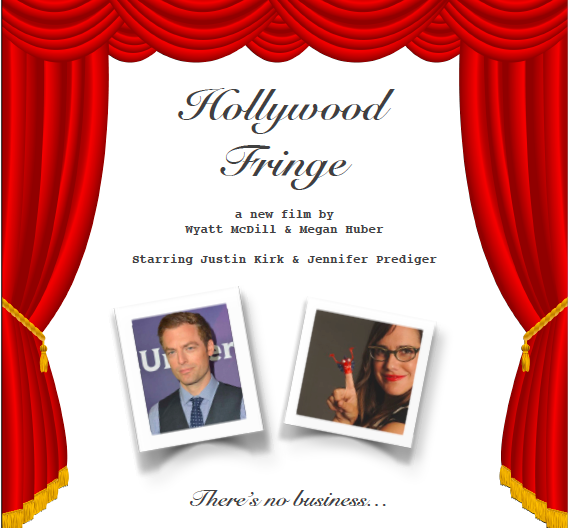 HOLLYWOOD FRINGE, by Wyatt McDill and Megan Huber, is the story of struggling 40-something Hollywood non-power couple Samantha (Jennifer Prediger) and Travis (Justin Kirk). The project Samantha and Travis have been pitching for years—Rainbow Farm—has finally been green-lit, but only on the condition a younger actress plays Samantha’s role. This seriously strains their personal and professional relationship. Samantha decides to move on by producing a haywire fringe play, while Travis watches Rainbow Farm become a caricature of their original concept.

Hollywood Fringe is funny and heartfelt, about friendship, relationships, and the acting profession. But mostly Hollywood Fringe is about the universal struggle to adjust to the undreamed of roles in which life casts us, whatever our occupation.

Benefits of Donations (100% tax deductible)
Donations large or small are welcome. You can use a credit card by clicking the DONATE button below, or make a check payable to FilmNorth and mail it to FilmNorth, 550 Vandalia St, Suite 120, St. Paul, MN 55114. Please write “Hollywood Fringe” on the memo line. FilmNorth is our 501(c)3 nonprofit fiscal agent that administers your donation and distributes the money as a grant to our film, minus 5% administration fee. FilmNorth will send you necessary tax-deduction paperwork. Thanks for your support!

Wyatt McDill – Writer/Director
Wyatt McDill is an independent filmmaker and artist based in Los Angeles and Minnesota. His short films have won two Jerome Foundation Grants and a Minnesota State Arts Board grant. They’ve shown at Slamdance, on the Independent Film Channel and at the Walker Art Center, among other places. He has written television scripts for FilmFinds and directed 12 episodes for Studio Luma. He wrote and directed Four Boxes, starring Justin Kirk, which premiered at SXSW and was distributed by Entertainment One. Wyatt’s script, Snowbird was previously optioned by River Road Entertainment, and he is currently in post production on the feature 3 Day Weekend, a dialogue-less thriller due out later this year.

Megan Huber – Producer/Co-Director
Megan Huber is a commercial, film and television producer. She produced Four Boxes, a social thriller starring Justin Kirk (Angels in America, Weeds), Terryn Westbrook and Sam Rosen. Four Boxes premiered at SXSW and played at many festivals, including the Seattle International Film Festival. Most recently she co- produced Song of Back and Neck, premiering in competition at the 2018 Tribeca Film Festival and she produced the upcoming thriller 3 Day Weekend. She has produced multi-million dollar ad campaigns for brands such as Target, Hilton, The Gap, and Rimmel. Previously she co- wrote and co- directed the Minnesota Fringe Festival hits Lovesick on a Sunny Afternoon and Nothing Matters When We’re Dancing.

Suzanne Fenton – Executive Producer
Originally from southern California and has happily lived in Minneapolis since 1993. Suzanne has spent the last twenty-five years helping raise funds for organizations, institutions, and causes she’s most passionate about – most recently, $38K for youth arts programming. As a writer, artist, and storyteller, she believes a good story must be shared with others and nothing inspires her more than a great movie.

Justin Kirk – Travis
Justin Kirk is best known for his Emmy Award-nominated role as ‘Prior Walter’ in the television mini-series Angels In America, opposite his Weeds costar Mary-Louise Parker. Kirk won the Obie Award for Love! Valour! Compassion! and went on to star in the film version of the play. His role in Jon Robin Baitz’s Ten Unknowns at Lincoln Center won him a Lucille Lortel Award, plus Drama Desk and Outer Critics Circle nominations. His other film credits include Molly’s Game, Life Happens, Nobody Walks and the upcoming Backseat, directed by Adam McKay. He has starred on television in the series, APB and guest-starred on Modern Family, You’re the Worst and Law & Order: Special Victims Unit. Currently he is slated to co-star in the Jim Carrey series Kidding for Showtime.

Jennifer Prediger – Samantha
Jennifer Prediger’s film, Apartment Troubles, co-starred Jess Wexler and featured Megan Mullally and Will Forte. The film premiered at the Los Angeles Film Festival, was distributed theatrically and continues to air regularly on Showtime. She starred in Joe Swanberg’s Uncle Kent which premiered at Sundance as has many roles in Sundance favorites such as The First Girl I Loved and A Teacher, directed by Hannah Fidell. She costarred in the 2017 Gotham Award Winner for Break through Series, The Strange Eyes of Dr. Meyes. She has been a commentator on The Today Show and NPR’s All Things Considered and was a contributor to the The Onion and Onion Radio News.

John Munson – Music Soundtrack
John Munson began his career with the band Trip Shakespeare, a group that featured the big harmonies of Munson, and brothers Matt and Dan Wilson. Later, Munson joined with Dan to form Semisonic, which scaled the musical pop charts with the single “Closing Time.” Currently Munson works with Matt Wilson as The Twilight Hours, and with Chan Poling and Steven Roehm as The New Standards, whose annual Holiday Show has been a Minneapolis must see event for over 10 years. John was the musical director for Wits on NPR and teaches Sound for the Image at MCTC.

Kiersten Ronning Hargroder – Costume Designer
Kiersten Ronning Hargroder is a native Minnesotan who worked with the Oscar Winning Costume Designer, Colleen Atwood (Tomb Raider, The Cloverfield Paradox, Alice in Wonderland) for over 10 years. Most recently she designed costumes for the Supergirl TV series starring Melissa Benoist. Kiersten has collaborated with Wyatt and Megan on all of their previous film projects.

Bo Hakala – Cinematographer
Bo Hakala splits his time between Minneapolis and Los Angeles. He has made music videos for artists such as Atmosphere and POS, and shot specials for the History Channel, as well as projects in conjunction with National Geographic, Nova and ABC. In narrative feature filmmaking, Bo lensed the romantic drama Stuck Between Stations featuring Josh Hartnett, Memorial Day with James Cromwell and the sci-fi thriller 400 Days, which features Dane Cook and Ben Feldman.