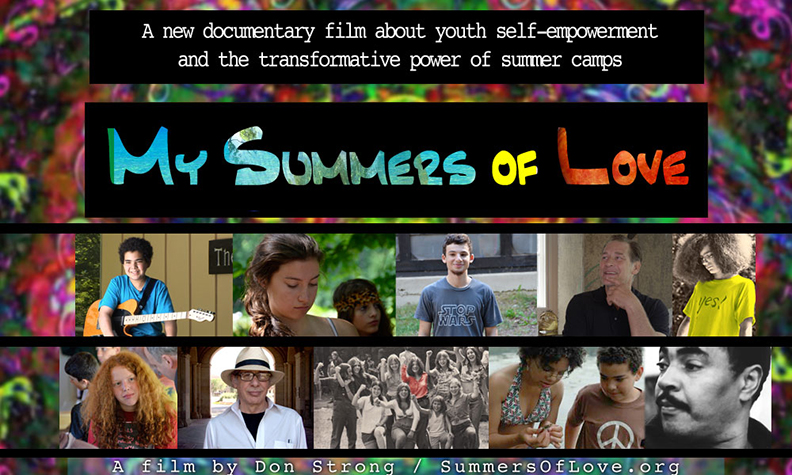 Woodstock for boy and girl scouts? Burning Man by a lake?
Imagine a hippie-like summer camp in the woods where 150 adolescents run free and make their own rules with almost no adult supervision.

“Homestead” was a summer camp where as a troubled, outsider teenager, I experienced empowerment and transformation. My Summers of Love tells the story of this extraordinary summer camp, and others like it, through the eyes of former campers and staff who helped mold and sustain it – and went on to create versions of the camp that continue to thrive today.

My Summers of Love is a film about the filmmaker’s teenage experience at an unusual summer camp called “Homestead.” This extraordinary place was the focal point for a personal, transformative journey. This feature-length documentary explores an intimate, coming-of-age experience, as well as the radical philosophy of youth empowerment at the heart of the original camp and its thriving, present-day versions.

Homestead ran as a unique, youth-directed entity. John Ertha, a charismatic, African-American educator and civil rights activist was hired by the liberal/progressive Unitarian-Universalist Community Church in New York City to direct the camp from 1965-1967. Ertha’s leadership philosophy, (based in part on A.S. Neil’s Summerhill School- which was also the model of the “Free School” movement in the ’60’s) was what could be called “radical empowerment” of youth – i.e., an 8-year old was allowed drive a motorboat, a 12-year served as bookkeeper for the camp. Any youth who wanted an opportunity to do or create something was encouraged to do it.

With minimal input from any adult, high school age counselors and younger campers envisioned and created all the camp programs and activities. Every camper had the freedom to participate – or not. In cooperation with staff, campers made the camp rules. In short, the Homestead experience was a liberating antithesis of traditional, hierarchical summer camps.

John Ertha inspired and trained a group of young leaders who would become torchbearers for his radical style of youth camp. Homestead folded in 1981 – but the Homestead tradition lives on today in other camps that are sponsored by various UUA (Unitarian-Universalist) fellowships throughout the US and Canada. My Summers of Love explores the influence and camp connection to the historically liberal/progressive Unitarian-Universalist movement.
My personal experience was shared by many peers who continued the work of empowerment experienced at the camp. Using the same approach, Bob Behr, a Homestead alum founded a similar summer camp for homeless NYC youth. Bob’s Camp Homeward Bound has been thriving for over 35 years – on the very same lake in Harriman State Park NY, and right next door to the site of Homestead, where, as a teen, I spent those five magical, life-changing summers.

More recently, as an emerging filmmaker, Don graduated from Minneapolis College’s Cinema Division with honors degrees in screenwriting (2007) and producing for cinema (2013). Since graduation he has produced several narrative shorts and a pilot show for The Food Network as well as writing several screenplays.

Musically, Strong has produced and collaborated with artists in a wide range of genres spanning singer-songwriter, jazz, acoustic pop,  Americana, and alternative. Currently active in the fertile, Minneapolis music scene, Don is creative director of  MyDeliciousMedia.com – a music and video production agency.

As an arts community volunteer, Strong works as organizer, songwriting mentor and showcase producer for Songwriters Circle /Twin Cities LLC, a non-profit organization he founded in 2014, that serves regional artists at all levels of creative and professional growth.