BEFORE YOU KNOW IT Screening at Excelsior Art on the Lake 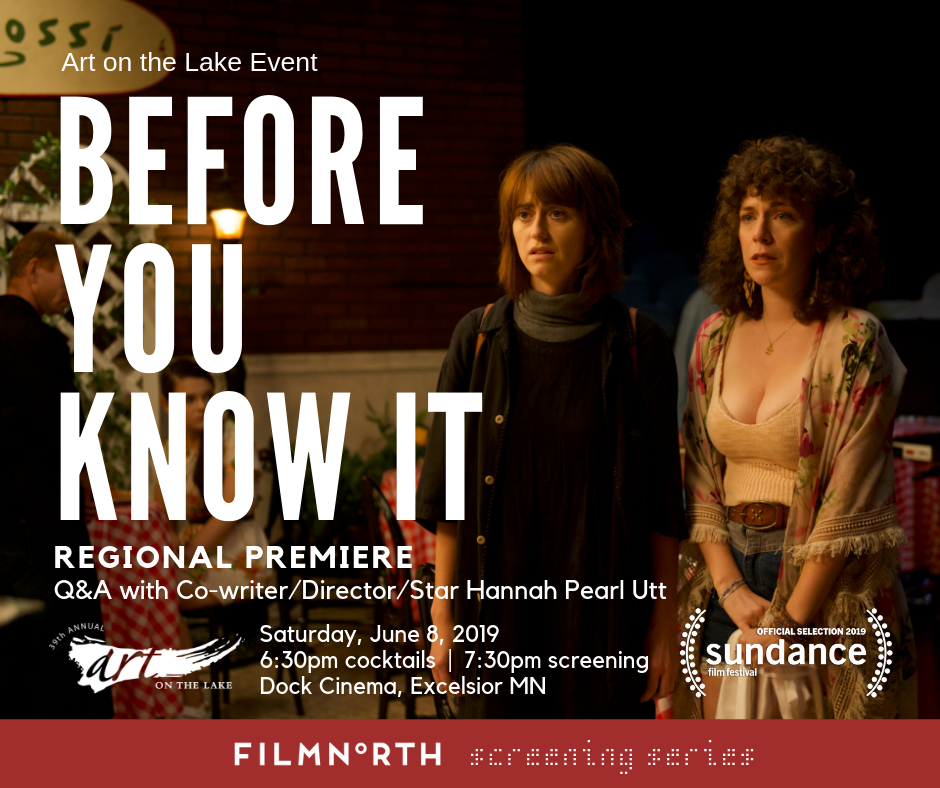 Join us in beautiful Excelsior for a special Art on the Lake screening and the regional premiere of the hit 2019 Sundance Film Festival selection BEFORE YOU KNOW IT – followed by a Q&A with co-writer/director/star HANNAH PEARL UTT.

BEFORE YOU KNOW IT
Stage manager Rachel Gurner still lives in her childhood apartment—along with her off-kilter actress sister, Jackie; eccentric playwright father Mel; and deadpan preteen niece Dodge—above the tiny theatre they own and operate. Level-headed and turtleneck-wearing Rachel is the only thing standing between her family and utter chaos. Then, in the wake of a sudden family tragedy, Rachel and Jackie learn their presumed-deceased mother is actually alive and thriving as a soap-opera star. Now the sisters’ already-precarious balance turns upside down, and Rachel must figure out how to liberate herself from this surreal imbroglio.

Co-writer/director/star Hannah Pearl Utt is a triple threat with an impeccable sense of timing and a flair for juxtaposing unpredictable elements. Just as pragmatic Rachel and off-the-wall Jackie seem to hail from different planets while inhabiting the same universe, so too do the film’s over-the-top moments and characters coexist alongside subtle, grounded ones. Equal parts madcap comedy, adult coming-of-age story, and poignant drama, Before You Know It gleefully defies categorization, and that is its genius. – Sundance

“Part of the reason Before You Know It is so entertaining is that it feels very familiar, yet the specificity of the world of the family established here elevates the film into something we haven’t seen before. This is a movie that covers wide thematic territory: It’s a drama that takes up serious subjects like death and abandonment but is also very funny, not because of punchlines but because of candor.” – The Hollywood Reporter

Hannah Pearl Utt is best known for directing and starring in the series Disengaged, which she created and wrote with Jen Tullock. Utt and Tullock’s short film Partners premiered at the 2016 Sundance Film Festival. In 2017, Utt was selected for Sundance Institute’s inaugural Catalyst Women initiative and the 2017 Sundance Directors and Screenwriters Lab. Before You Know It, which received a 2018 Adrienne Shelly Foundation Women Filmmakers Grant, marks Utt’s feature directorial debut.