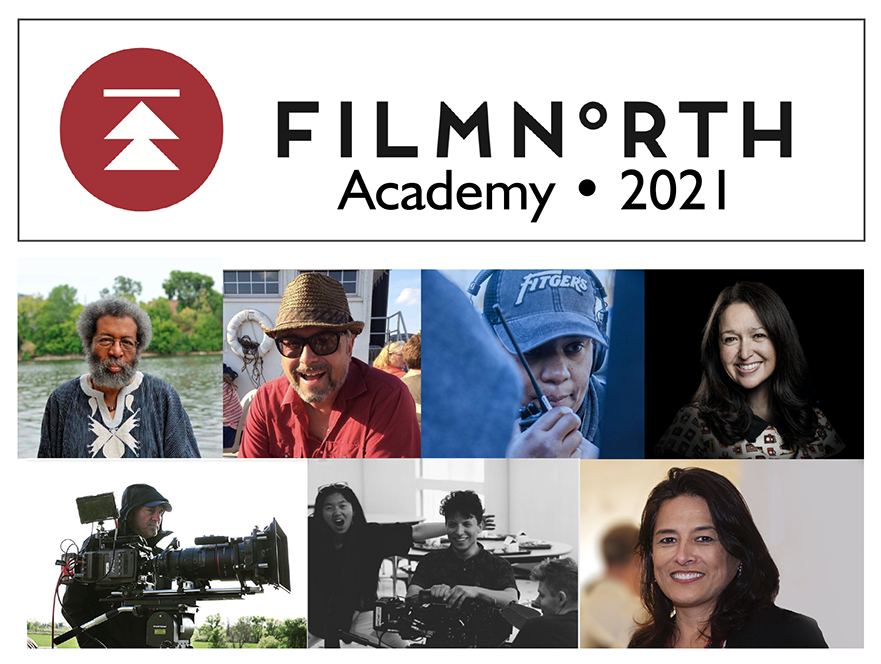 *If in-person sessions become possible, the program may shift to meeting weekly on Thursdays, 12-4 pm, at FilmNorth.

This online summer program is designed for students (ages 17-24) currently studying film or interested in a career in film. A series of guest artists will offer insight into different aspects of narrative filmmaking as the students work through developing, scripting, shooting, and editing their own short films.

Some or all of FilmNorth Academy 2021 will take place remotely via Zoom. Students will need access to a smart phone or computer with some editing capability. If health guidelines change and in-person sessions become possible, the program may shift to weekly in-person sessions on Thursdays, 12-4 pm.

Prerequisite: Students interested in registering for the program need to complete an application. Applicants will receive notification from the instructor by e-mail. Accepted applicants will be given further instructions to complete their registration.

TO APPLY, CLICK ON THIS LINK TO COMPLETE THE APPLICATION: https://forms.gle/BYXE8oo3QZLKzpZXA

NOTE: Participation in this online course requires that you use the free Zoom cloud-based video conferencing service. For optimal performance it is highly recommended that you install Zoom to your computer rather than using it through a web browser. A few days prior to the class start date we’ll e-mail you the link and ID code needed to access this class on Zoom. Your instructor will be provided a student roster to take attendance. Click here for a tutorial on how to join a Zoom meeting and much more.

If you have questions about the program contact Deacon.

Deacon Warner has led youth programming at FilmNorth since 2007. As Youth Programs Director, he expanded youth programming to include after school programming, summer camps, in-school residencies and professional opportunities. Deacon also oversees the Twin Cities Young Filmmaker Coalition,  a student-led network of college-age filmmakers, and is lead instructor for FilmNorth Academy, a summer institute for students pursuing a career in film. As an independent filmmaker, he has produced and directed a number of short documentaries including the award winning Bee-Sharp Honeybee and Peaceful Warriors: on the road with Vets for Peace. Deacon recently completed his first feature documentary, The Co-op Wars, which played in film festivals and aired on Twin Cities PBS (tpt). Before working at FilmNorth, Deacon was a social studies teacher at North High in Minneapolis and founder of the Polar Producers after-school documentary team.

Valérie Déus is a Haitian American poet, emerging filmmaker and film programmer. Her work has been featured in The Brooklyn Rail, Midway, Why Vandalism, aforemention productions, The Star Tribune, the St. Paul Almanac and The BeZine. Her chapbook, Skull-Filled Sun, is available on Amazon and her first short film Downtown Daydreams was accepted into the 2011 Co-Kisser Poetry Film Festival. When she’s not writing or making shorts, she is the host of Project 35, a local radio show where she plays world music and poetry. She is the programmer FilmNorth’s Cinema Lounge and the shorts programmer for The Provincetown Film Festival. She is in the process of completing her second short film Manifestasyon.

David Grant is a Twin Cities-based screenwriter and playwright. As a screenwriter, a sampling of his work includes The Screenplay Project: Four Shorts for Twin Cities Public Television (KTCA TV), the feature film scripts, Fast Girls for Russell Simmons’ Def Pictures and Spirit Dive for HBO New York, Black & Blue, a feature length dramatic series pilot for Davis Entertainment and the Showtime Network, Block by Block, a web-based dramatic series for children, and the feature-length documentary, Word of Honor: Redeeming Mandela’s Promise, for Monde World Films. He has also written numerous industrial scripts for such clients as Health Partners and Hazelden Foundation.

He has been a recipient of screenwriting fellowships from the Minnesota State Arts Board and the McKnight Foundation. He and KTCA, Twin Cities Public Television were awarded the 1990 Regional Emmy Award for Best Original Dramatic Program for The Screenplay Project: Four Shorts.

David is currently teaching screenwriting at FilmNorth and at MN Prison Writing Workshop. He has also taught screenwriting at The Loft, the Playwrights’ Center, and S.A.S.E., in addition to serving as Mentor for screenwriting students at Augsburg University’s MFA in Creative Writing program.

Grant is a graduate of Antioch College. He is president emeritus of Screenwriters’ Workshop, a core alumnus member of The Playwrights’ Center, and a member of the Writers’ Guild of America, West.

As a cinematographer and director, Tahiel Jimenez uses film as his primary creative language and medium for healing and expression of truth. His process challenges him to dive into his story and create films to share with others in hopes they are able to unravel their story. Tahiel creates art for collective transformation and catharsis intersected with themes of trauma and love in immigrant and BIPOC identities.

He co-creates with film directors to tell impactful stories that revolve around mutual interests of race, immigration, gender, and socioeconomic inequities. These realities exist in his own story and the people in his everyday life. On some days, he is busy on film sets with lights, cameras, directors and crews to capture the soul of stories. Most days, he works to nurture relationships, plan projects, deepen his awareness, and expand my perspective of self, politics, spirituality, history, emotions, stories, and cinematic craft.

Tahiel is currently working on a longterm documentary project called The Subversive Sirens. The Subversive Sirens present the inner lives of seven artists and activists who break out into the world of synchronized swimming as an act of political warfare. They represent an intersection of multiple identities and desires, and they fight for Black liberation, equity in the aquatic arts, body positivity, and queer visibility. He will also create his first solo-directed short film, “My Mama Can’t Swim,” based on the story of an immigrant mother and son as they attempt to heal their broken relationship at a pond after years of separation.

Tahiel currently spends his time between his home country of Colombia and Minnesota.

Atlas Phoenix (formerly Ayesha Adu), they/them/theirs, is an award-winning director, writer, producer, actor, and editor who creates compelling, provocative film work. Based in Minneapolis, Minnesota, their previous artistic work has been about the darkness of human nature, child abuse, and familial dysfunction.

Atlas’ work has been screened at multiple film festivals, Intermedia Arts, online, and MNTV. In 2018, they received a Minnesota State Arts Board Artist Initiative Grant to produce and direct their short screenplay, Little Men. In 2020, Little Men won Honorable Mention at the Black Continental Independent Movie Awards festival and was nominated for six awards, including best director. Also, in 2020, Little Men won an Award of Recognition from IndieFEST, among other awards from various festivals. Little Men was also an official selection for the 17th annual Seattle Black Film Festival and the 39th annual Minneapolis St. Paul International Film Festival amongst other festivals including tours in Bucharest and the UK. In 2018, Little Men won a Platinum Remi Award from the WorldFest Houston International Film Festival for the short screenplay.

Atlas is the recipient of multiple grants including the Jerome Foundation Media Arts Grant, The Jerome Foundation Travel Grant, and the VSA Emerging Artist Grant. In addition, they ran a highly successful campaign on GoFundMe for their film, Little Men, raising over $8,000 with another $2000 in private donations.

Kevin Russell is an alumni of the Minneapolis College of Art & Design in Minnesota with a degree in filmmaking. He has over a decade of experience in production and post with roles on national commercials, television series and independent documentaries. Currently, his craft is focused on developing stories and aesthetics as a creative agency staff editor. His work involves clients throughout the country, but Kevin resides in Minneapolis, Minnesota with his wife Ash.

Greg Winter has worked as a cinematographer for more than 30 years. His first feature film, Detective Fiction, directed by Patrick Coyle, was admitted to the 2003 Sundance Film Festival and subsequently distributed on the Sundance Channel and the Independent Film Channel. In 2004 Greg was the cinematographer for the independent project, Justice, a feature film directed by John Shulman and Jean-Marie Almonor, which was nominated for a 2005 NAACP Image Award and distributed to Black STARZ. The film was also used as a voter registration tool around the United States. In June 2005 Greg photographed Test Tube for director Ann Sorenson. A book he photographed about historic Minnesota quilts was nominated for a 2006 Minnesota Book Award. In September 2007 Greg completed Shared Sacrifice: Rock County in War, which focused on the experiences and impressions of Rock County residents during World War II. TPT included the film in the broadcast schedule around Ken Burns’s The War. In 2008 Greg shot The Egg Timer for director Emily Haddad, the IFP Fresh Filmmaker grant recipient. He completed The Jingle Dress with director William Eigen in September of 2013. In July 2014 Greg completed photography on Robert in the Bedroom, a short on the subject of Alzheimer’s, for director Cynthia Uhrich, and Domestics, a feature film directed by John Shulman and Jean-Marie Almonor. In September 2016 he split the cinematographer duties with Buck Holzemer on Charlie Griak’s 2nd feature, Nina of the Woods. Greg recently collaborated again with Cynthia Uhrich on “Oh My Stars,” a short film written by regional author Lorna Landvik. In October 2018 Greg worked again with Ann Sorenson, this time with students from UNWSP, on “My First Funeral.” He is currently engaged on a documentary about Patrick Scully, artist and choreographer, with director Mark Wojahn.

Greg works as a freelance Director/Cinematographer. He also teaches at the University of St. Thomas, University of Northwestern–St Paul, and FilmNorth. Greg also served for 20 years on the Minnesota Film & TV Board.

Mark Wojahn is a filmmaker, photographer, and commercial art department lead for film & TV in Minneapolis, Minnesota. He has been active in the Twin Cities film and art scene since the early 1990s.

His films have toured several times across the U.S.A. and been exhibited internationally. Mark’s documentaries include What America Needs (1995), What America Needs: from Sea to Shining Sea (2005), Trampoline (2010) and Getting Lost in My Own Art: The Creative World of James R. Bakkom (2012). His latest project in production is a film on the dancer Patrick Scully.

Mark’s artwork has been shown in the Midwest in galleries and is in many private collections. Mark also co-hosts Casket Cinema, an underground studio-cinema located in the Casket Art Building in NE Minneapolis, showing the best in independent documentaries since 2008.