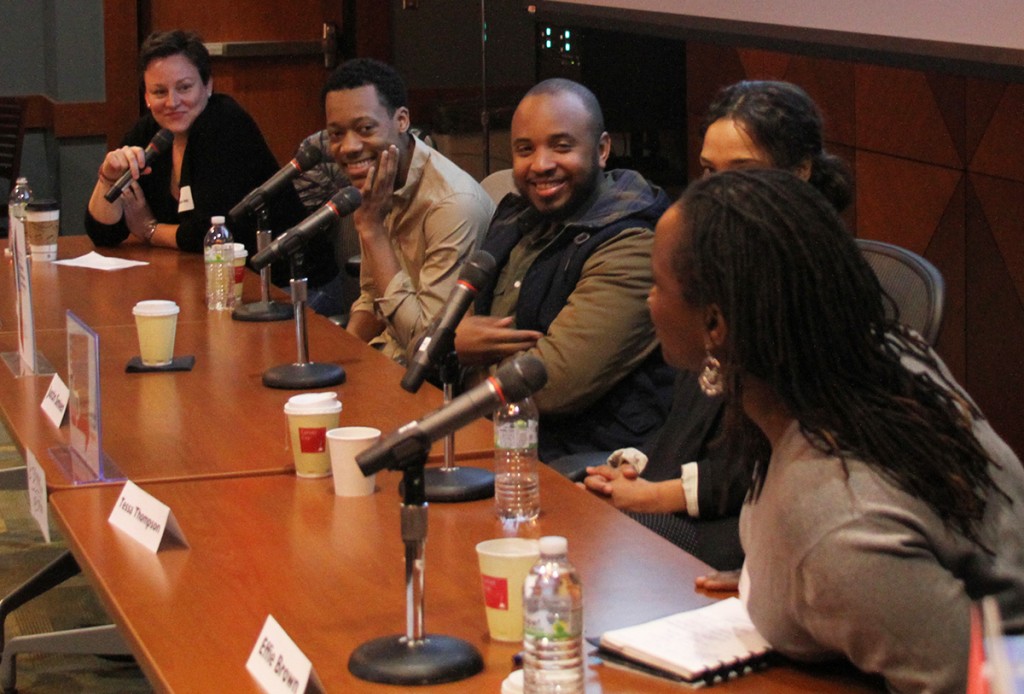 In 1984 Lynn Blumenthal started her casting career with Marc Schwartz Casting. To this day it is Marc whom she credits with not only teaching her the ropes, but also showing her how to take her love for acting and actors and apply it to a job where she could thrive. After three years of assisting with casting for the Aaron Spelling hit shows, DYNASTY and THE COLBY’S, Lynn moved to Chicago and became the head film/television agent at Harrise Davidson & Assoc. There she had the good fortune to work with some of the Windy City’s best (Steve Carrel, Mike Myers, Bonnie Hunt, Johnny Galecki, and Laura Flynn Boyle) and continued her ongoing education in the business. In 1989 Lynn opened Lynn Blumenthal Casting in Minneapolis. Since then LBC has been providing clients around the country with an impeccable eye for talent and the ability to direct the best performance from them. FMI: www.lbcasting.com

Kathy Byrne has been the Director of TV/Theatrical for SAG-AFTRA Chicago since May, 2010. In addition to running the TV/Theatrical Department, she also is the head of Agency Relations for the Chicago local. This entails working with Franchised Agents in the Chicago market. Kathy is a firm believer in outreach to both actors and filmmakers who are beginning their careers, or who have worked on several film projects without realizing how easy it is to work with SAG-AFTRA actors and contracts. Prior to her position at SAG-AFTRA, Kathy was the Project Coordinator for Film and Television for the Chicago Film Office for nearly 20 years. In that position she worked with such projects as THE DARK KNIGHT, THE FUGITIVE, ER, WANTED, THE OPRAH WINFREY SHOW, PUBLIC ENEMIES, and STRANGER THAN FICTION. She also was the Program Coordinator for the Chicago Outdoor Film Festival for three years.

Penelope Falk is best known for her work on JOAN RIVERS: A PIECE OF WORK, which won her an Excellence in Editing award at the Sundance Film Festival. Other partial film credits include MAIDENTRIP (winner of the SXSW Audience Award), THE NEW PUBLIC (winner of the Golden Cine Award), SMILE ‘TIL IT HURTS: THE UP WITH PEOPLE STORY (premiered at Slamdance Film Festival), TOOTS (premiered at the Tribeca Film Festival), and STAGEDOOR (debuted at the New York Film Forum). Partial TV film credits include: MARVIN HAMLISCH: WHAT I DID FOR LOVE (American Experience), ELECTION DAY (POV), UNFINISHED COUNTRY (Wide Angle), and AFGHAN STORIES (the Sundance Channel).

Deirdre Haj (Director, Full Frame Documentary Film Festival) recently moved to the Twin Cities with her family. At Full Frame, she implemented free year-round screenings as well as the “Teach the Teachers” program and lending library, “The School of Doc” and the “A&E IndieFilms Speakeasy” discussion venue. Under her leadership the festival is now a PGA qualifying festival for both long and short form documentary films, as well as an Oscar qualifying festival for short form documentary. The 2014 winning film, WHITE EARTH, qualified and went on to receive an Academy Award nomination. Recently Deirdre spoke on a panel at the International Film Festival Summit about the relationship between filmmakers and festivals, and the IDA’s Getting Real conference, wrote an article for Indiewire called “Why Filmmakers Need the Festival Forum,” and had an interview published in the online peer reviewed journal Synoptique.

Tom Hall is the Director of the Montclair Film Festival in Montclair, NJ. He previously held the position of Director, Artistic Director and Director of Programming at the Sarasota Film Festival (2005-2014) and Programming Director at newportFILM in Newport, RI (2009-2011). In addition, Tom was Programmer for The Nantucket Film Festival in Nantucket, MA (2002-2005) as well as a former Director of New Media for Bravo/The Independent Film Channel (1997-2000). He has also worked in the Industry and Guest Services Offices at The Hamptons International Film Festival (2002-2003). In January of 2010, Tom was named one of Spring Board Media’s 20 under 40 in Film. Tom has directed short films for Bob Mould’s Carnival of Light and Sound Tour and was an inaugural member of the indieWIRE blogging community with his blog The Back Row Manifesto, which is now a standalone website. A 1994 graduate of the University of Michigan, Tom resides in Brooklyn, NY with his wife and two sons.

Dan Hunt is a Soros Media Fellow and works on the programming team at the Tribeca Film Festival. He teaches classes in media theory and production at Marymount Manhattan College, bringing over 20 years of award-winning documentary experience as a producer and director whose work focuses on topics as broad as gender and sexuality, prison reform, and environmental sustainability. Dan’s work has broadcast on PBS, ABC, Documentary Channel, Logo, and WEtv and screened at film festivals all over the world. His work has been funded by the MacArthur Foundation, Viacom, Robeson Fund, Phillips Foundation, Corporation for Public Broadcasting, Subaru, CitiBank, Soros Foundation, and the NEH. Past documentary work has been awarded several Telly Awards, the Cine Golden Eagle Award, Gracie Allen Award given by American Women in Radio and TV, National Association of Education’s Media Award, and nominated for multiple Emmys.

Michelle Hutchison is a veteran of film, television, and the stage. Classically trained in theatre, her keen comedy chops landed her in the world of improvisation performing with comedy troupes in Minneapolis, Chicago, and Los Angeles. In Los Angeles, she appeared in the LA Weekly nominated hit show, THE BAD SEED, and CABIN PRESSURE at The Hudson Theatre. She has appeared in blockbuster feature films such as the Coen Brothers’ FARGO and MY BEST FRIEND’S WEDDING as well as the independent films FACTOTUM, INTO TEMPTATION, NOBODY, THIN ICE, STAY THEN GO, MIDNIGHT SWIM, and PUBLIC DOMAIN. Michelle has worked steadily in national and regional television commercials, industrials, print, and voiceover work. Michelle’s work as a writer, director, and producer includes the nationally syndicated Travel Channel show, PASSPORT TO DESIGN, and seven original shorts, including recently wrapped MISSY’S KEY, and TIME’S UP for the 48 Hour Film Project, which garnered her a nomination for Best Writing and Best Acting.

Many moons ago, Kelly Nathe was a Publicity Manager for the Los Angeles Film Fest, a publicist for Cowboy Booking, and the PR/Marketing Director for IFP/MN. She is currently a writer and documentary filmmaker based in both Los Angeles and Minneapolis. Her first documentary, HOTEL HIDAJET, received awards at SXSW and Slamdance Film Festivals. She worked as a field producer on a number of docu-series for A&E, TLC, Discovery, and VH1 before joining the staff of Public Interest Pictures, working on seminal political documentaries, including HACKING DEMOCRACY for HBO and UNPRECEDENTED by Robert Greenwald. She recently helped produce MISS TIBET: BEAUTY IN EXILE, which held it’s world premiere at DOC NYC, where it was lucky enough to be represented by Emma Griffiths. She is currently co-directing and producing her next feature documentary about prohibition-era moonshine and the modern craft whiskey revival, MINNESOTA 13.

Matt Osterman is an award-winning filmmaker best known for his independent debut feature, GHOST FROM THE MACHINE and the upcoming sci-fi, 400 DAYS (starring Brandon Routh, Dane Cook, Caity Lotz, Ben Feldman, and Tom Cavanagh). GHOST FROM THE MACHINE premiered in 2010 at the Fantasia Film Festival in Montreal, played dozens of festivals around the world, is distributed by Screen Media Films, and was bought by NBC/Universal. A few years prior, Matt produced the documentary SPORTSFAN, which was executive produced by Jon Stewart and premiered on SpikeTV. Matt also worked closely with Emmy Award-winning and New York Times bestselling author, Dan Buettner, in the launch of the Blue Zones franchise. Matt is a Fellow of the IFP Filmmaker’s Lab and lives in the Twin Cities with his amazing family.

Andrew Peterson is the Director of Programming for the Provincetown Film Festival, a position he’s held since 2006. During his tenure he has helped to significantly increase press and industry attendance and solidify Provincetown as a major stop on the US festival circuit. In addition to his programming duties, Andrew also secures festival honorees. Past honorees include Quentin Tarantino, Darren Aronofksy, Gael Garcia Bernal, Tilda Swinton, Albert Maysles, and more. He has served on Entertainment Partners panels on production tax incentives, mentored projects at the Canadien Film Centre’s Go West Project Lab, and regularly consults festivals and film projects. He served as Director of Theatre Operations at the Sundance Film Festival (2003-2005) and Vice President of Production at Werc Werk Works (2008-2012) where he co-produced their feature films HOWL, LIFE DURING WARTIME, THIN ICE, and DARLING COMPANION. Since 2013 Andrew has been the Executive Director of IFP Minnesota. He holds an MFA from New York University Graduate Film School.

Tom Scott has over 20 years experience as a composer and musician working in film and television. He has presented film music workshops in Africa (Zanzibar International Film Festival) and is the recipient of a McKnight Composer Fellowship, a Bush Composer Fellowship, an American Composers Forum Music in Motion commission, and was selected to participate in the ASCAP Hollywood Film Scoring Workshop. He has composed for and conducted orchestral recording sessions with the Hollywood Studio Symphony, Dallas Symphony Orchestra, Slovak National Symphony Orchestra, and FAMES Macedonia Radio Symphony. His documentary film score work includes the Emmy Award-winning history doc, NORTHSTAR: MINNESOTA’S BLACK PIONEERS, and the Academy Award-nominated WAR DANCE.

Mark Steele is the VP of Production at Werc Werk Works where he was Co-Producer on Lawrence Kasdan’s DARLING COMPANION, Jill Sprecher’s THIN ICE, Rob Epstein & Jeffrey Freidman’s HOWL, and Todd Solondz’s LIFE DURING WARTIME. Other producing credits include Zachary Heinzerling’s Oscar-nominated CUTIE & THE BOXER, and Michael Sladek’s CON ARTIST. Mark is an industry recognized Post-Production Supervisor and has been the technical and operations guru for various film festivals (Sundance, Tribeca, Telluride and more). Steele was a 2013 Trans-Atlantic Partners Producing Fellow and is a member of the Producers Guild of America.

Director Annie Sundberg, an award-winning filmmaker known for crafting deft and cinematic journeys through unexpected territory, heads Break Thru Films with her filmmaking partner Ricki Stern. In addition to 12 Emmy nominations for their work, they have been recognized with Gotham, Spirit Award and IDA nominations, a 2008 Alfred I. duPont Award for broadcast journalism and a People’s Choice nomination. Annie and Ricki are members of Documentary branch of the Academy of Motion Pictures Arts & Sciences. Their newest film, IN MY FATHER’S HOUSE, charts Grammy-winning artist Che “Rhymefest” Smith on a powerful journey to reconnect with his homeless father on the South Side of Chicago. The film will be in theaters this fall and will premiere on Showtime in January 2016. Other films include: JOAN RIVERS: A PIECE OF WORK, THE DEVIL CAME ON HORSEBACK, THE TRIALS OF DARRYL HUNT, KNUCKLEBALL!, and the Emmy-nominated HBO movie BURMA SOLDIER, nominated for a 2011 Irish Academy Award for Best Feature Documentary. Annie produced the feature TULLY, nominated for four Independent Spirit Awards.